Sega's combat racer gets shrunk down for Sony's handheld; Deep Fried behind the wheel of game's development.

When Full Auto 2: Battlelines was announced at E3 2006, some were surprised that the game was being developed as a PlayStation 3 exclusive. However, Sega today revealed that the game won't be just for the PS3--it will however, still be limited to Sony platforms.

Battlelines is currently in development for the PlayStation Portable and, according to the game's official Web site, is due in stores spring 2007. The game is being created by Vancouver, Canada's Deep Fried Entertainment.

Like its console counterpart, Full Auto 2 is a car combat game featuring vehicles outfitted with various weapons. Gamers will speed around 15 fully destructible environments in a race to see who can finish first and in one piece.

The single-player game features 56 events, and multiplayer modes include a variety of modes, including Head-On, Down & Back, and Arena Deathmatch. Also carrying over from the console version is the unwreck feature, which allows gamers to reverse time and have a second chance at maintaining their safe driver's insurance discount. 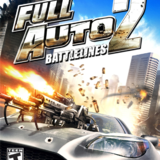