Frogger: The Great Quest will bring the 20-year-old franchise onto the PlayStation 2. With time comes evolution, a theory supported by the fact that this new Frogger is an action-adventure--not a log-hopping strategy game. Save the princess, become a prince, and enjoy a Frogger that walks upright.

Frogger and Frogger 2: Swampy's Revenge rank near the top in terms of PlayStation success stories--each game has actually sold more than 2 million copies within the last three years. This October, Konami is hoping that lightning will strike thrice when it releases the latest in the Frogger lineage, a PlayStation 2 adventure entitled Frogger: The Great Quest.

Firefly pond is a lonely place, especially for a limber frog. Fed up with the isolation, Frogger heads out in search of a princess to keep him company. In the video game world, just as in real life, such a task is far from easy. Before Frogger meets the damsel of his dreams and wins her heart, you'll take him through all the dark caverns, swirling streams, perilous swamps, and dark castles that comprise the game's 20 fairy-tale-inspired areas. Along the way, you'll face off against an as-of-yet-unnamed nemesis, perform favors for Frogger's many forest friends, and--yes--even hop across a log or two.

As you may have guessed by now, Frogger: The Great Quest is primarily an adventure game. In contrast with the Froggers of yesteryear, puzzles are merely one of many gameplay components to be featured in this next-generation Frog's tale. Although this may chagrin some folks, fans of the series will admit that it has been making a steady progression in this direction ever since Frogger 2 debuted on the PlayStation.

Much like in UbiSoft's Rayman 2, the bipedal hero in Frogger: The Great Quest will be able to jump, punch, swim, and climb his way out of danger, as well as make use of a number of helpful items. Loot collected during your travels will also be redeemable for skill upgrades, like enhanced speed or increased jump ability. The key to unlocking all of the secrets will be how well you interact with a cadre of local characters, which will number upward of 80--all with their own unique dialogue and personalities brought to life by a bevy of talented voice actors.

The demo of Frogger: The Great Quest on display at this year's E3 suggested a free-form world populated by a plethora of rocky platforms, chatty characters, and dangerous caverns. Unfortunately, it also suggested a rampant overuse of earthy colors and low-polygon counts, leading many to wonder if Konami's luck is running out. According to Bryce Nakagawa, a coder involved with the game's level design, layout, and tuning, "A lot of what passed for gameplay and visuals at E3 will not be representative of the final product."

Inquiring about just how different the final product would be from what was on display, Nakagawa revealed that much of the meatier work for bringing the game to fruition would be ongoing throughout the summer. Although neither Nakagawa nor Konami's PR representatives would go into detail about the project's pre-E3 conception, more than a few in the know suggest that a significant chunk of development time was spent acclimating to the PlayStation 2's restrictive architecture and bringing the game's graphical engine up to snuff with the project's lofty design goals.

Since Frogger: The Great Quest is a work in progress, we grilled Nakagawa for a few more details on what fans can expect when this latest release in the Frogger series hits stores this fall.

GameSpot: Besides the fairy-tale, princess-oriented storyline, what else can you tell us about the plot of Frogger: The Great Quest?

Bryce Nakagawa: There's been a lot of work done on the plot, but I should probably avoid saying anything concrete, lest anything I talk about not making the final cut. There will be good guys, bad guys, and a love interest for Frogger, as well as a new archvillain for him to face. All the character designs are pretty much in the tank, but how they'll interact and relate to one another is still tentative.

GS: When all is said and done, how many total characters will there be?

BN: There won't be any controllable characters outside of Frogger, but there are going to be dozens of friendly and unfriendly characters to interact with.

GS: Will the classic Frogger elements, such as jumping over logs, leaping atop turtles, and dodging oncoming motor vehicles, make it into Frogger: The Great Quest?

BN: There will be a certain amount of hopping on floating logs and stuff, but cars don't really fit into the fairy-tale theme that we're shooting for. Environmental interaction will play a large role within the game, and there will be a few "vehicle" stages so that players won't miss the roadkill aspect too much.

GS: The E3 demo suggests a design similar to that of Rayman 2 in terms of premise and exploration (for example, talking to characters, performing favors, fighting bad guys, and beating bosses). Would you say that you're shooting to give the younger audience another viable option in the adventure genre, one with a distinctly Frogger charm?

BN: That's it in a nutshell.

GS: With that in mind, will the areas in Frogger: The Great Quest be integrated into a single overworld or based on missions?

BN: Our current list has 20 levels, but that number might shift. They'll all be separate levels, but you'll be able to jump around and play levels you've already completed to try to find all the loot. Most areas will be fairly large as well.

GS: At E3, the demo looked a bit rough around the gills. In fact, all involved with the project seem to hint that the final released product will be much better and more refined than the E3 version suggests. Can you comment further?

BN: I probably shouldn't comment on our specific circumstances until after the game's shipped, but I'm sure you've heard the rumors about how difficult the PS2 is to work on. They're not all true, but it is a learning experience.

GS: Neat. What do you plan to do after Frogger is in the can?

BN: I don't have any idea of what I'm doing after this, but personally, I hope it involves guns.

There you have it. Frogger: The Great Quest hits PlayStation 2 consoles this October. Although geared toward younger players, the game's free-roaming gameplay and multimillion dollar TV campaign ought to bring it a great deal of broad exposure for the Christmas shopping season. 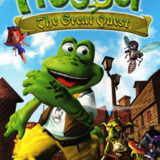