The heyday of 2D platformers has long since passed, but every so often, you'll see a love letter to that bygone era pop up as a moderately priced digital download. One of the latest in line is Fret Nice, which is due out for release next month on Xbox Live Arcade and the PlayStation Network. This artsy side-scroller is seeking to leave its mark on the genre with a control scheme that's nothing short of unique. The game is designed to be played with a guitar peripheral--whether Guitar Hero or Rock Band--as your primary means of running, jumping, and attacking enemies. There are no scrolling note highways to be found here--just a vibrant 2D world where left-to-right exploration is done with a plastic six-string.

How does it work, exactly? It starts out simply enough. You hit the green fret to move left, you hit the yellow fret to move right, and you tilt the guitar to jump. Those three inputs form the core of your movement. Easy, right? Attacking enemies gets a bit more complicated. The rotund bad guys coming after you--think of them as goombahs covered in fur--all have a random number of facial features. One might have a single eye, another might have three eyes with a mouth, and so on. Your job is to leap into the air and zap the enemies by playing the number of notes that match the number of facial features. So, for example, jumping into the air and playing a single blue note will kill that one-eyed enemy, while playing three blue notes and an orange note will kill the three-eyed, one-mouthed beast. You can improvise whatever color notes you play; all that matters is matching up the numbers.

Of course, button mashing will also get the job done. It's sort of a thousand-monkeys-on-a-thousand-typewriters scenario: Recklessly wailing out riffs will eventually produce the notations required to destroy your enemies, but that comes at a penalty. The game tracks how quickly and efficiently you move through each level and awards you medals based on how well you perform. You'll be able to unlock new levels faster by moving briskly and avoiding missed notes. Later levels introduce new dangers, like vehicle sequences and boss fights, but the basics of the game are always jumping and shredding.

Fret Nice's other defining trait is its art design. The colorful world of paper cut-out landscapes and bizarre characters feels like an art school project come to life. And in many ways, it is one. The original concept for Fret Nice was devised by a Swedish university student as a thesis project, and now, several years later, the game is being developed into a full-fledged console game with the help of publisher Tecmo. That indie lineage is on full display with nearly everything in the game, including the adorably bouncy soundtrack and the Three Wolf Moon T-shirt you can slap on yourself as part of the impressive character customization system.

For those who'd rather take in the aesthetic without having to tilt the guitar every time they want to jump, Fret Nice will offer an alternate control scheme that maps all those abilities to a standard controller. You can also run through every level alongside a friend using the two-player mode, mixing and matching control options between the two of you. Expect to see our review of Fret Nice when it arrives on Xbox Live Arcade and the PlayStation Network next month. 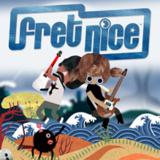