Check out the first episode of GungHo's CG show based on its Nintendo Switch ninja game.

Developer GungHo Online Entertainment has dropped the first episode of an animated show based on Ninjala, the free-to-play multiplayer action game coming to Nintendo Switch on May 27.

The first episode delves into the game's lore, with a narrator explaining the ninja's birth and demise before bringing the present day into focus. In Ninjala's world, ninja are incognito these days, living as everyday people while attempting to tap into their latent ninja abilities. The episode shows three scientists--Burton, Berecca, and Ron--experimenting with "ninja gum," a candy-like substance that unlocks their inner ninja and grants them access to ancient ninja weaponry. There's a funny Peter Parker/Spider-Man moment, where two of the three giddily run around the room after discovering their powers. And even a pretty cool fight scene.

You can check out the first episode below. Considering the "To Be Continued" screen, it's very likely GungHo Entertainment may working on more episodes.

Ninjala was originally revealed in 2018, and GungHo had scheduled to launch the game sometime in 2019. The Nintendo Switch exclusive missed its 2019 release window, but GungHo shared more information about Ninjala during a Nintendo Direct Mini livestream--including new gameplay footage and the release date. 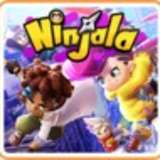