Nintendo's free exercise game has been updated with some Nintendo costumes, and one is a returning character fans have been hoping for.

Jump Rope Challenge, the free Nintendo Switch fitness game that released in June, has just received a free update that adds several new costumes to the game's rabbit protagonist. They're mostly the usual suspects, but there's one surprise.

Here's the complete list of character costumes included in the update.

A free update for #JumpRopeChallenge is now available, adding new costumes, backgrounds and even the ability to double-under!

The most interesting addition here is Arcade Bunny, a character who has only ever featured in one other Nintendo game--Nintendo Badge Arcade, a 3DS title that handed out badges that could be attached to the system's home screen. Arcade Bunny was a fully fleshed-out character, and since the 3DS title stopped receiving updates many fans have missed them.

New backgrounds have been added to the game too, as well as a new ability--you can now double-under by swinging your Joy-Cons very quickly.

Jump Rope Challenge will remain free to download on Nintendo Switch until September 30, 2020. 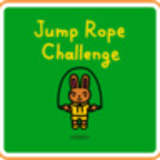