The free DLC for Sackboy: A Big Adventure features Ratchet, Rivet, and Clank costumes from Ratchet and Clank: Rift Apart.

All of the costumes are available on the PlayStation Store for free--although each costume is its own download--and mash together the Sackboy aesthetic with the Ratchet and Clank character designs. Clank's costume looks identical to his design in Ratchet and Clank, while both Ratchet and Rivet look like Chibi versions of themselves.

All-new Ratchet, Clank and Rivet costumes and emotes are out now for Sackboy: A Big Adventure!
Download from PS Store to begin your own dimension-hopping antics: https://t.co/DoslMNUM4J pic.twitter.com/d9y2GN3V4b

Sackboy: A Big Adventure is available on PS4 and PS5, and has received multiple free cosmetics since its launch last November. Most recently it got a Returnal costume, featuring Selene's spacesuit and a special emote.

Ratchet and Clank: Rift Apart is available now on PS5, and some of its developers have been celebrating a crunch-free development on Twitter. In GameSpot's Ratchet and Clank: Rift Apart review, critic Steve Watts awarded the game a 9/10, writing, "It's just as silly, sweet, and earnest as the Ratchet & Clank series tends to be, while the new generation of hardware makes this entry look and play better than ever. Like the heroes and villains and their dimensional counterparts, this one may appear different or carry itself with a new accent, but there's an underlying truth to the person underneath. At its core, it's still your trusty old pals on another grand space adventure. That's what's important." 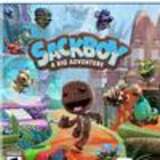