One of several Pokemon announcements.

Update: The mobile release date for Pokemon Quest has been announced. The game is coming to iOS and Android on June 27. Data from the Switch version does not transfer to mobile and vice versa. The original story follows.

Original story: The Pokemon Company has announced a new game for Nintendo Switch, Pokemon Quest, and it's out now. The spin-off game, which is free to start, features a blocky art style and top-down, real-time action-RPG gameplay in which "face off against wild Pokemon and embark on many exciting expeditions," according to the company. You can download it for free right now on the Eshop.

Pokemon Quest is set in a new area called Tumblecube Island and includes first-generation Pokemon. In addition to building a party of Pokemon and venturing out into a blocky world, the game lets you decorate and customize a headquarters area, not unlike Secret Bases in Ruby and Sapphire.

The new Pokemon game is developed by main series developer Game Freak, which does not typically work on spin-off Pokemon games. Following the game's launch on Switch, Pokemon Quest will launch on mobile in late June.

This announcement comes alongside other Pokemon news, including the reveal of new RPGs for Switch: Pokemon Let's Go Pikachu and Let's Go Eevee. Those games, which are based on Pokemon Yellow and are compatible with Pokemon Go, are launching in November. The Pokemon Company also confirmed that the core Pokemon RPG announced during Nintendo's E3 2017 presentation is separate from the Let's Go games and set for a late 2019 release. 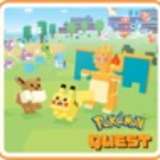