Freaky Flyers, Midway's fusion of flying and kart racing, is currently in development for the PlayStation 2, GameCube, and Xbox. The game has you selecting from a large array of characters and then taking to the sky as you race through a variety of outlandish courses against other aerial combatants. The gameplay mechanics in Freaky Flyers are similar to what you'll find in most kart-style racing games. As you fly around the track, you'll notice floating question marks that you can fly through to acquire a random item for use against your competitors, such as heat-seeking missiles or speed boosts. Of course, the first flyer across the finish line wins.

Freaky Flyers attempts to build on the standard kart racing formula in a number of ways. For one, each of the game's 13 initially selectable characters has his or her own unique storyline to play through, complete with lengthy CG cutscenes. The game will also contain more than just racing action--you'll have access to a variety of strange minigames that see you protecting a desert fort from rampaging banditos or being shrunk down and trying to escape from inside a human body, among other things. The game's assortment of courses includes a variety of environments, such as a Middle Eastern city, a snowy mountain, the dark forests of Transylvania, and even Chicago. Freaky Flyers will also contain roughly 20 unlockable characters and a multiplayer mode, if you need more reason to play it repeatedly.

Freaky Flyers has been in development for a while, and it looks like the game will finally see the light of day this summer. We'll bring you more information on the game as it becomes available. 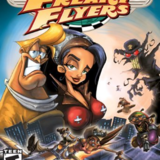