Following last week's delays of College Hoops 2K6 and Top Spin 2, the January Xbox 360 calendar has lost another game. Today, Namco confirmed that Frame City Killer, its sci-fi shooter for the next-gen console, has been pushed back. Still listed as a "Winter 2005" release on the Namco Web site, the game was expected by many this month. Games with "winter" windows, most notably Resident Evil 4, often slip past the holidays into January of the following year.

So when will the game finally come to North American 360s? "Frame City Killer is slated to launch in the second half of 2006," a Namco rep told GameSpot. "We are looking forward to launching our second Xbox 360 title later this year." The game was already delayed in Japan.

Set in the year 2047, Frame City Killer is a sci-fi shooter that follows Crow, a government assassin. Crow has been assigned the unenviable task of taking out several drug kingpins in the game's titular metropolis, a Blade Runner-esque neon hellscape rife with crime. Frame City Killer is being developed using the Unreal 3 engine, and it will take advantage of the Xbox 360's online functionality, even though it's a single-player game. It will also feature futuristic, Matrix-like gunplay and martial arts combat. For more details, check out GameSpot's previous coverage. 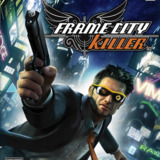