An awakening in the Force.

It seemed almost inevitable that the Lego video game series would return to the film franchise that started it all. So it was no surprise when TT Games confirmed that, 11 years after the release of the original Lego Star Wars, the developer was once again heading to a galaxy far, far away with its take on the movie megahit, Star Wars: The Force Awakens.

After briefly playing the game last week during GDC, I can confidently say that Lego Star Wars: The Force Awakens is a… Lego game. That means everything that has now become standard in this long-running series--the goofy attitude, the kid-friendly nature, the light puzzle solving and simplified combat--are all present. That's not necessarily a negative: despite their similar natures, previous Lego games have succeeded in large part through their undeniable charm and approachable systems.

But with The Force Awakens, TT Games now has one of the biggest films of all time to play with and mold to its unique specifications. So what exactly does this latest Lego game have to offer?

Lego Star Wars: The Force Awakens will of course let you play through most of the film (including that impressive Millennium Falcon sequence in the skies of Jakku), but it'll also have seven new levels that expand on the events in the movie. Some examples confirmed in the game's new trailer include a level about Han Solo and Chewie capturing those octopus-like rathtars, some more backstory on Lor San Tekka (the old dude at the beginning of the film), and a level following the adventures of everyone's favorite new pilot, Poe Dameron. No word on whether these levels are being considered as official canon, but given the light tone of the Lego games, it's likely safe to say they won't be.

This game, of course, won't be a straight copy of previous Lego titles. There are some new features making their debut here, including blaster battles (where light cover mechanics are introduced in certain blaster-heavy sections of the game), full 360-degree aerial/space battles, and choices when it comes to building Lego structures. Those choices, however, don't seem to have a huge impact on what happens within the game (at least in the very limited gameplay time I had), and may end up being purely cosmetic choices that produce the same result.

Daisy Ridley has recorded some new dialogue for the game

Dialogue from the actors in the movie is being used in the game. As an added bonus, it's been confirmed that Daisy Ridley, who played Rey in the movie, also recorded new lines just for Lego Star Wars.

There will be a huge list of playable characters

According to a TT Games spokesperson, the game will feature 200 playable Star War characters, as well as 40 vehicles (including mounts). No confirmation on whether that 200 will span all of the Star Wars films or just focus on The Force Awakens, however. 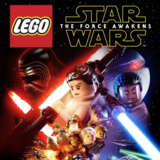