A free update for Forza Horizon 4 is out today, adding stunt races to PlayGround Games' recreation of the British countryside. Titled Super7, the new mode is all about leaping off big ramps and hurtling around obstacle courses.

The free update was announced during the latest Forza Monthly developer stream. While rumours swirled before the stream that PlayGround Games was set to reveal the next Forza Horizon game, it ended up being about more Forza Horizon 4.

Super7 builds upon the game's existing track creator by allowing players to create challenge courses featuring air, drift, and speed sections. The new Blueprint Builder lets you can design stunts and place a number of structures throughout the course, which can be placed anywhere on Forza Horizon 4's expansive map.

As the name suggests, there are seven curated stunts that greet you when entering the mode for the first time. These consist of randomly selected challenges and completing all seven will reward you with new in-game rewards, including the 1924 Austin Seven and 1979 Triumph TR7 Roadster.

If you're playing on Xbox Series X|S, Forza Horizon 4 also received a number of next-gen enhancements last month. The racer now runs at 4K and 60 frames per second, and has dramatically improved load times. 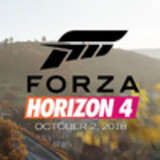