Dress up like Mario, Peach, and company for a boost.

Ahead of its release next week, publisher XSeed Games has provided a look at the Mario crossover content in Story of Seasons: Trio of Towns.

As seen in the video below, players can obtain four different Mario-themed costumes to wear: Mario himself, Luigi, Peach, and Toad. Each provides its own unique buff when worn, as detailed below.

Trio of Towns is the latest game in Marvelous Entertainment's Story of Seasons series, which is known as Bokujo Monogatari in Japan. The series was previously localized in western markets as Harvest Moon, which is celebrating its 20-year anniversary this year. The Natsume-published games under that name are now developed by a separate team, with Marvelous's games coming to the West as Story of Seasons.

Trio of Towns launches for 3DS on February 28. 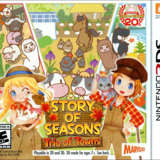