FlOw Update: Under the Sea

We dive into a near-final version of the upcoming downloadable game for the PS3.

SCEA's upcoming downloadable goodie flOw is a title that's equal parts sim-life game and funky sensory experience. The game has been on our radar since we first saw it at last year's Tokyo Game Show. The months following our first glimpse of it shed light on the unique title's origins. The game started out as a USC student's graduate project and morphed into a Flash game, then into the upcoming PS3 game. On the PS3, flOw has evolved with cleaner, high-definition visuals (the game will run in 1080p at launch), as well as higher production values, including THX support. We had the chance to try out a near-final version of the game to see how it's coming along and zone out a bit.

FlOw's gameplay is as primal as gaming gets. The game puts you in control of an aquatic critter that you'll maneuver around with the Sixaxis controller. Your goal is to eat everything floating around you and make your way down to the bottom of a body of water. The act of eating what's around you bulks up your critter to larger proportions, which comes in handy when dealing with some of the more aggressive creatures you'll find as you descend. To descend or ascend, you'll have to eat various red or blue items; red items move you down a level, while blue moves you up one. You'll also be able to eat power-ups of sorts that buff you out and increase the size of your mouth.

The simple action works pretty well with the Sixaxis controller. You'll steer your critter by moving the controller and trigger a burst of speed or a special ability depending on what you're playing as. All told, the game will feature five creatures to use, which you'll unlock sequentially. The version we're playing now requires you to use the Sixaxis' motion control exclusively, as opposed to the analog sticks, which we were able to use when we last saw it in November.

FlOw's presentation is simple but has a subtle charm thanks to a rich color palette and atmospheric audio. The game features no interface at all--you'll be in control of your creature as soon as the game loads up. The playfield is richly colored and meant to represent water. As you start to use the other creatures you'll notice different hues to the water, which keeps the game visually interesting. The assorted critters and objects you'll encounter will run the gamut from abstract creations to more traditional, jellyfish-inspired creatures. The music in the game offers a dreamy ebbing-and-flowing choir that's punctuated by effects that reflect the action onscreen.

Based on what we've played so far, flOw is a unique game that should be well worth a look when it hits the PlayStation store. The original title is unlike anything available for the PS3 and offers and an engaging experience that's fun to either play or watch. FlOw is slated to be available at the PlayStation store later this month. 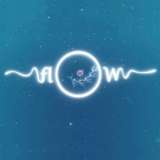