Flintlock: The Siege Of Dawn Comes To Game Pass Day One

Flintlock: The Siege Of Dawn Comes to Game Pass in early 2023.

The trailer shown off at the showcase opens with a woman narrating about how the gods appeared and ruined everyone's life. She then goes on to explain how she intends to find out if she can kill a god. The trailer then goes on to show beta gameplay of her fighting a series of enemies using melee/ranged weapons and even magic. While she's fighting these enemies, she has a trusted companion helping her with every fight.

The game features an open world where players can fly through deserts, trek through ruins, and explore the mysterious City of Dawn. Flintlock The Siege Of Dawn is a new IP from the team who brought us Ashen, an action RPG in 2018.

For more Flintlock: The Siege Of Dawn check out this story: 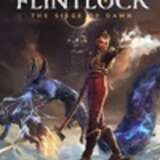