Flappy Bird Returns With Multiplayer, But Only for Amazon Fire TV Right Now

As creator Dong Nguyen promised, Flappy Bird has returned. A new version of the massively popular mobile game is now available on Amazon Fire TV, presumably before a wider release for iOS and Android devices.

The new version of Flappy Bird is called Flappy Birds Family. It includes new features like a Person vs. Person mode and, as if the standard green pipes weren't challenging enough, additional obstacles (ghosts) to avoid. The game is still "very hard," according to the description.

When Nguyen announced in May that Flappy Bird would return, he said the new version would be "less addictive." One of the first reviews for Flappy Bird Family says this goal has been met. "This version is not as addictive as the original, and for that I am thankful!" wrote one reviewer.

Nguyen removed the game from iTunes and Google Play in February after writing on Twitter: "I cannot take this anymore." The decision to pull the game was a serious one, as the title was pulling in an average of $50,000 in daily ad revenue. 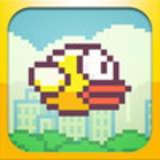