A flagship technically isn't much of a flagship without a fleet to back it up, so it's fitting that San Francisco-based Flagship Studios today announced the formation of its first offshoot studio, Flagship Seattle.

The new studio's first project will be Mythos, a casual online role-playing game designed to try out the networking technology that will be used in Flagship's previously announced Hellgate: London. Heading up development at Flagship Seattle will be Travis Baldree, formerly of WildTangent, where he was lead designer on the PC action-RPG Fate.

Mythos creative director and Flagship Studios founding member Phil Shenk said in a statement that the Flagship team was "very impressed" with Baldree's work after seeing the Diablo-esque Fate at E3 2005. Shenk was the lead character artist on Diablo II, and Flagship Studios was formed by a number of employees from Diablo developer Blizzard North.

Mythos should be released in 2007, while Flagship has yet to specify a release window for Hellgate: London. 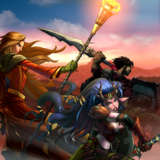