Fighting games have appeared on home consoles for more than 20 years, yet they struggle to advance beyond basic game modes. It's time to set the new standard for this genre.

Fighting games have produced some beautiful and complex ways for people to beat the tar out of each other. Yet, aside from a handful of games, the typical fighter is still designed with the traditional, minimalist approach of delivering the best arcade approximation. This leads to an anemic game mode selection. While sufficient for genre veterans, this selection doesn't cut it in 2012. For the fighting genre to continue its resurgence, developers must establish new standards that give consumers more incentives to play. Otherwise, the current momentum will break, and the genre could implode. 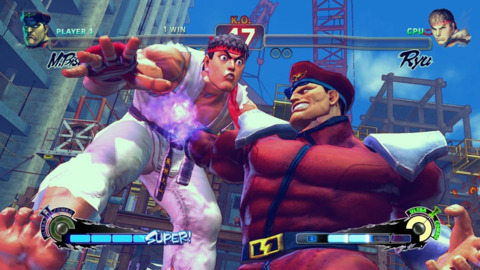 Fighting online feels a lot like this for some players.

This risk looms large for two reasons: the market is being slammed with fighting games all targeted at the same core audience, and all these games have a high barrier to entry. These facts present some unique, long-term problems. Chiefly, developers are returning to the same well too often. Eventually, they will reach a point where the market can no longer support so many fighters all vying for the same dollar. Games will flop, developers will go under, and the scene will shrink along with the number of new fighting games. In fact, it may have already started.

According to data collected from the NPD Group, fighting fans are reaching their limits. Ultimate Marvel vs. Capcom 3 fell short of its predecessor by a significant margin. The King of Fighters XIII, despite all its improvements, still hovers around the sales of The King of Fighters XII. And the same can be said for BlazBlue: Continuum Shift versus BlazBlue: Calamity Trigger. Then there's the issue of fighting-game training modes. As previously discussed in Failures in Training, these modes are ill-equipped to prepare newcomers for competitive play--let alone casual online fun. If fighting games can't find ways to become more appealing to a larger audience, the community will stagnate.

The risk of a second implosion is real; it happened once before. Back in the '90s, when Street Fighter II was making waves, game developers were tripping over themselves to get a fighting game on the market. This fervor led to such gems as Justice League Task Force, Star Wars: Masters of Teras Kasi, and dozens more copy cats. By the turn of the millennium, public interest was shot and fighting games became a niche genre. There were simply too many iterative releases offering essentially the same mechanics. Then Street Fighter IV happened. Now these games are back in a big way. But if the genre wants to continue growing, it must widen its scope and cater to more than the tournament players. It must evolve. 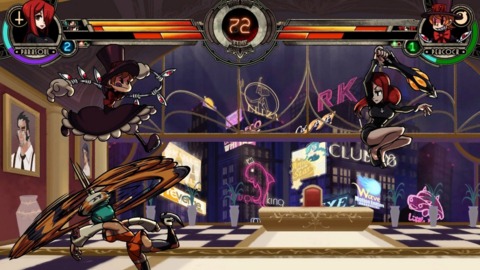 Fighting games need to strike a better balance of content.

Evolution can take many forms. Looking outside the fighting genre, Blizzard Entertainment's Starcraft II: Wings of Liberty is an excellent example of getting it right. The game's focus is squarely on competitive multiplayer and tournament play--not unlike most fighting games. Yet Blizzard still put resources toward developing an engaging single-player campaign. This campaign wasn't just mindless battles against the computer; each mission had a unique twist, and players were incentivized with new units, upgrades, and a grand story along the way. For some people, this was all they wanted; online held no appeal for them. While fighting and real-time strategy are two very different genres, the fighting genre could learn a lot from Starcraft II's balance of single- and multiplayer content.

Where developers have made promising (yet inconsistent) strides has been in player incentives. The weapon master mode in SoulCalibur II had numerous combat conditions and rewarded you with new weapons and costumes. The Tekken series has also experimented with different game modes using its fighting engine, ranging from bowling to an arcade-style brawler. Unorthodox? Sure. But this is the sort of experimentation developers need to be doing. It's easy to think fighting games aren't flexible enough to handle nontraditional modes--until someone gets it right. There are lots of creative opportunities that need to be explored, not just for fighting mechanics but for game modes. 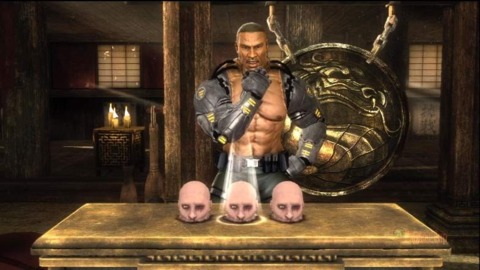 Mortal Kombat actually had something for you to do outside of traditional versus fighting.

As of this writing, the gold standard for game modes is developer NetherRealm Studios' reboot of Mortal Kombat. This game expertly balanced a fun fighting system with a variety of different game modes. Between the hundreds of challenges, the entertaining story, and online with replay and spectator support--all types of players could get engaged. And whether you fought casually with a friend or in serious competition, the game rewarded both with currency and unlockable rewards. Toss in a training mode that actually teaches you about fighting games, and you've got the complete set. These elements should form the basis for all fighters, not the exception.

Fully realized fighting games will have long-term benefits for the entire genre. They attract players who normally wouldn't consider purchasing a fighting game and maybe, just maybe, convert a few of those casual players into dedicated enthusiasts over time. That leads to a larger fighting community that attracts more developers working on more fighting games with bigger budgets. And they're fun! Tekken Bowl is fun! Mortal Kombat's Challenge Tower is fun! These additional modes add value to your hard-earned, $60 purchase. They make you feel like you bought a complete game, rather than a fighting system. 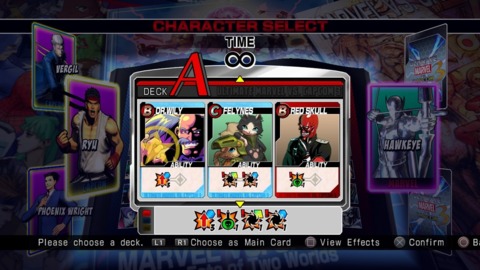 The cards in UMVC3's Heroes and Heralds mode were a good reward system that affected combat.

In contrast, heavy postrelease downloadable content strategies are a short-term boon for individual developers. Let us consider Street Fighter X Tekken, a game designed to be one of the most complex--yet accessible--fighting games to date. It features dozens of different mechanics, as well as a few shortcuts to make those mechanics easier. But, while playing the game got easier, one crucial factor was missing: a reason to care.

In contrast, Heavy postrelease DLC strategies are a short-term boon for individual developers.

Chances are, the majority of people for whom those shortcuts were intended are not going to use them. They will play a few rounds with a friend, see a few videos online, or maybe rent it over a weekend and think, "OK, I've seen enough." That's because there is very little to actually do in the game other than prepare for, and play, online. That's all well and good for Capcom's target market, but if the developer really wanted this game to resonate with a wider audience, it should have provided more ways to play.

Rewards are a good place to start. People enjoy being rewarded, and it encourages them to keep playing. In its recent DLC pricing announcement, Capcom listed a lot of neat extras that will be given away for free, including additional gems, color packs, and quick combos. What if, instead of trickling these items into our laps over a few months, there was an in-game economy, a la Mortal Kombat, that awarded you currency for playing the game that could then be redeemed for these items? That gives you a goal to achieve and a reason to keep playing. Granted there are those goofy titles, but they're difficult to work for since their unlock conditions are kept secret and are relevant only during online play. 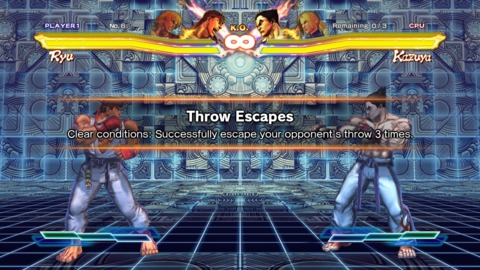 There's hardly any reason to bother with SFXT's mission mode, other than the arbitrary letter grade.

Capcom is not the only developer grappling with this. SoulCalibur V, The King of Fighters XIII, and more fall into similar straits. Most likely the ideas and concepts presented here were also presented in design meetings for all these games. But, at the end of the day, video games are a business, and there are deadlines, release windows, and so much else to consider. Realizing features outside of the core design requires something that is becoming a rare commodity in game development: flexibility. Instead, most fighters play it safe, and we all go down together.

So, what should the new standard be for fighting game modes? In a perfect world, the selection for all fighters would include the following at a minimum:

Arcade: default game mode that lets you fight your way through the roster to the end boss
Story: narrative-driven mode focusing on presentation and storytelling; main single-player offering
Mission: meaty helping of challenges that put a twist on the mechanics and offer significant rewards
Training: instructional suite for all skill levels; combo demonstrations with timing indicators required
Versus: offline competitive versus mode, including survival and tournament modes
Online: online versus mode with tournament support, spectating, and replay sharing

Again, this list represents the base level of game modes each fighting game should include. Extras, such as minigames, cosmetic items, and character customization, are also acceptable (and encouraged) but are not as essential as the staples listed above. Then there's the issue of DLC. At best, it can extend the life of a fighter and instill extra value, a la Super Street Fighter IV: Arcade Edition. At worst, it locks out a significant portion of the game, thus hurting its value. The debate still rages over a unified theory of DLC, and in all likelihood there are plenty of knuckleheaded strategies to come. 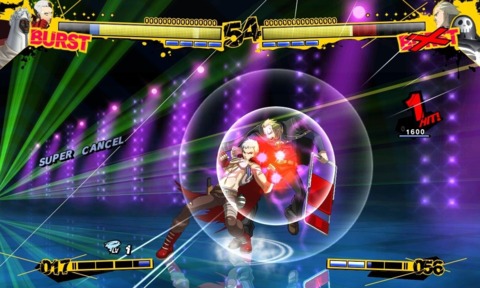 Cross-platform support between 360 and PS3 would help build a community around games rather than platforms.

If executed properly, the new fighting game standard will give more players a reason to start throwing down in the digital ring. It will grow the genre to support the dozens of fighters current and forthcoming, including Skullgirls, Dead or Alive 5, Tekken Tag Tournament 2, Virtua Fighter 5 Final Showdown, and more. With any luck, developers will rise to meet this challenge and help open up the genre for more players to enjoy. But what do you think? Do our concerns ring true? Was there an item that got left off the list? Leave a comment in the section below, or contact the author with the buttons at the top and bottom of the page.