We're still a ways off from the 2010 target release date for Windows 7, but we're already loving the OS's new features and usability.

There are a lot of features in Windows 7 that we haven't explored yet such as the new touch screen options, hand writing recognition, and DirectX 11. While touch screen computing and handwriting recognition seem pretty cool, they're not particularly relevant to PC gaming. DirectX 11 counts as a gaming-related feature--but it's also coming to Windows Vista, so it's not really a feature unique to Windows 7. (We also have to wait for the game developers to make software that uses the new GPGPU, general processing on the GPU, and tessellation support in DX11.)

That said, here are the five really cool features that we're excited about in Windows 7!

User account control was supposed to be Vista's ace in the hole for security. It works if you're strict about following the onscreen instructions, but when the OS keeps throwing up permission prompts every time you try to do anything, you tend to get into the habit of clicking yes all of the time. Want to click on that link? Open that file? Sneeze near the monitor? Just click "continue." Even worse, many of us disabled UAC altogether to get the OS to stop interrupting the desktop experience. Microsoft heard all the complaints and fixed UAC in Windows 7. The new user account control will have multiple warning threshold settings, and the OS will now intrude much less by default, though you can configure the feature to be the nagging nanny it was before. Windows 7 will do what it's told and, for lack of a better expression, will shut the hell up until something truly sketchy needs your attention.

We hate waiting for our PCs to boot. Microsoft knows this and has rolled out a combination attack to reduce boot times in Windows 7. Microsoft trimmed the number of system-critical services, reduced CPU, RAM, and hard-disk overhead, and improved prefetching to speed up disk seeks in Windows 7. The developers also added parallelization in device and driver initialization. And it shows, our Windows 7 beta test system booted in 26 seconds compared to 33 seconds in Windows Vista.

Windows Vista is a behemoth of an operating system. It can technically run on 512MB of RAM, but that's like saying Crysis runs on a GeForce 6800. Vista isn't usable unless you have at least 2GB of RAM with 4GB being ideal. Windows 7 should be much leaner. So far our 1GB test system is much more usable with the Windows 7 beta than with Windows Vista. The system boots in a reasonable amount of time, programs snap open, and the dreaded hard drive churns don't occur every time we look at the mouse. We ran a few 3DMark Vantage tests and found that the game performance in the Windows 7 beta is on par with Windows Vista.

Windows 7 improves usability in a lot of ways and you can find one of the best new features right now in the Internet Explorer 8 beta. Internet Explorer 8 features accelerators--quick built-in shortcuts--that make posting to Facebook, mapping an address, and sending a link a whole lot easier. Actions that used to require multiple steps are now streamlined with right-click menu options. Want a map of that address? Right-click the address and open the map. Done. You're not limited to Microsoft-provided accelerators either. There are already tons of accelerators from Google, Facebook, Newegg, Wikipedia, and more. Windows 7 has the same right-click on anything accelerator options set up for common applications such as Windows Media Player, Windows Live Messenger, and Internet Explorer.

Have you tried the Windows 7 beta yet? Interested in the new features? What do you think of the OS?

Windows 7 comes with a snazzy new taskbar that makes finding and using windows, tabs, and programs much easier. The traditional Windows Vista taskbar shows individual folders and programs. It's not uncommon to get taskbars two or three layers deep for users who like to keep a lot of open items. The Windows 7 taskbar helps organize similar items to save space. You have the option to enable folder and application grouping in Vista and XP, but finding individual windows didn't work as smoothly on the older operating systems. Windows 7 taskbar folders stack together and provide clear previews of their contents on mouseover. Internet Explorer 8 Web browser tabs get their own individual thumbnail previews that show up side by side to help you find the page you want.

Users can also pin programs to the taskbar, a la quicklaunch, but these Windows 7 taskbar buttons can do a lot more than just launch the program. Click on the Windows Live Messenger icon to open a host of options that will let you change your away status or send a message right from the taskbar. The Windows Media player button lets you play files or enable shuffle and Internet Explorer brings up a list of recently visited sites that you can launch instantly.

We also like the new window management features. You can throw windows against the side of the screen to make them take up exactly half the screen. Pull two windows to opposite sides to compare and read two documents in a snap. The windows revert back to their original sizes when you pull them away from the edges of the screen. Additionally, you can shake one window side-to-side to quickly minimize everything else on the screen.

A new taskbar action center lets you quickly customize what icons and alerts you want to see. Annoyed by the automatic update notifications? Gone. Don't need to see the network status? Gone.

Sharing files over the network is half voodoo and half luck for many users on older Windows operating systems. Sometimes computers show up on the network, and other times the network neighborhood sits there with a spinning icon before ultimately crashing. Windows 7's new home-networking features should make file sharing at home a snap. New, easy-to-make homegroups let you share files between computers at home very quickly. The system doesn't require any IP addresses or complex share management. Joining a homegroup is as simple as joining a Wi-Fi network now--which, incidentally, is also easier. Joining wireless networks is as easy as clicking on the Wi-Fi icon in the taskbar. Simply select the network you want to join without having to open up any extra dialog boxes. 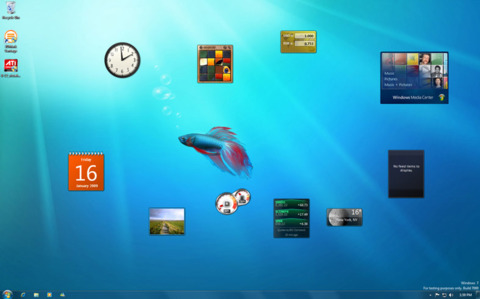 Windows Vista brought gadgets to mainstream users, but the sidebar was limiting and placing gadgets on the desktop made screen real estate a problem. To see the gadgets you'd either have to keep them on a part of the screen you didn't use or minimize windows in order to see them. The key difference is that Windows 7 has a new show desktop button that makes checking out your gadgets super-easy. A quick mouse hover over the button lets you see your entire desktop and gadget collection without having to minimize any windows.

Most everyone has a big hard drive these days, and an extra terabyte is only $100 away at today's storage prices. However, not all of us have easily accessible networks that we can use to store files. The ability to access your files is just as important as being able to store them. With that in mind, Microsoft released SkyDrive, 25GB of free online storage, accessible anywhere as long as you have an Internet connection and a free Windows Live account. The service launched on December 8, 2008, so it's available now. SkyDrive isn't a Windows 7 feature, but we're hoping that Microsoft will increase the amount of storage you get over time and truly integrate the service into the new OS.

Windows 7 has a few power-saving upgrades that improve on-the-road battery life and in general lower power consumption for both laptops and desktops. Intelligent activity monitoring will determine whether you are using your computer and will automatically shift screen brightness to a lower setting while your system is idle. Another big power saving feature turns off the juice to connected USB devices not in use, which doesn't seem like a lot of power, but it really adds up over time. Media playback optimizations will also help to reduce processor, GPU, and optical-drive usage, which will reduce power consumption.

It's rare to encounter cameras, MP3 players, or other USB devices that require driver installations anymore, and Microsoft wants to make sure things get even easier in Windows 7. Microsoft wants to open up more detailed action menus whenever you plug in a new device. Instead of popping up a generic prompt with a few options, most devices should give specific prompts that will better expose device-specific uses. For example, plugging in a phone might bring up a prompt that offers options for syncing, ringtones, pictures, and music.

Have you tried the Windows 7 beta yet? What do you think of the new OS?