Going with a super cute angle and combat that looks like it comes from an old-school Final Fantasy RPG is certainly a different direction to take the series.

FNAF World is set to release sometime next year.

For those looking for a more horror-focused experience, a Halloween update will be released for FNAF 4 game on October 31. It's set to introduce a cheat menu, a challenge menu, and other new content.

But what do you think of the new trailer? Let us know in the comments below! 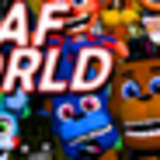