Five more 3DO games are approved for the PS2

The PlayStation 2 will receive an influx of new 3DO games this month.

Comments
The 3DO Company has announced that five of its upcoming PlayStation 2 games have been approved by SCEA and have entered the manufacturing phase. High Heat Baseball 2002, Warriors of Might and Magic, Army Men: Green Rogue, Army Men: Air Attack 2, and Army Men: Sarge's Heroes 2 should all be released by the end of March. The 3DO Company has already released World Destruction League: Thunder Tanks and Aqua Aqua for the PS2. 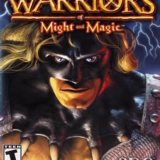