FIST, An Action-Platformer Starring A Rabbit With A Giant Metal Fist, Announced For PS4 And PC

The dieselpunk inspired game has a rabbit fighting robots with a giant metal fist.

FIST: Forged in Shadow Torch, a dieselpunk action-platformer starring an anthropomorphic rabbit with a massive metal fist, has been announced for PlayStation 4. Detailed in a PlayStation Blog post, the game takes place on a planet inhabited by animals that must battle an invading race of machine-like creatures.

The main character Rayton is a battle-hardened rabbit with a massive third arm made of metal attached to his back. Rayton must battle and traverse through an industrialized city to rescue a friend captured by the machines.

The rabbit warrior has other weapons--a drill and a whip--at his disposal, allowing for a variety of combos and the chance for players to adapt their play style to different enemy types. The game features 2D combat and traversal with 3D characters and environments.

FIST was announced as part of the PlayStation Indies Initiative, where Sony is showcasing a number of new indie games. The game doesn't have a set release date but is said to be coming to PS4 soon. The game is also releasing on Steam according to the developer's website. 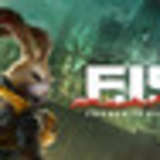