Gate of Thunder and Super Air Zonk set to be first disc-based games to arrive on Virtual Console when they are released next month.

The classic side-scrolling shooter Gate of Thunder originally came out in 1992 and was packed in with the TurboDuo system, which was itself a combo of the TurboGrafx-16 and its Turbo CD add-on. It proved popular enough to spawn a sequel--Lords of Thunder--the following year, and was developed by Red Entertainment (developers of the Gungrave series and the new Mr. Domino game for the Wii).

Hudson is also prepping another Red-developed title for an October release: Super Air Zonk. As the name suggests, the game is a follow-up to Air Zonk, which is already available on the Virtual Console. Red took advantage of the spacious-for-the-time CD format for the game's soundtrack, which led to the game's "Rockabilly Paradise" subtitle.

Those two games will also be joined by the non-CD TurboGrafx-16 release Samurai Ghost. The side-scrolling action game pits players against an onslaught of tigers, skeletons, and disembodied flying heads. 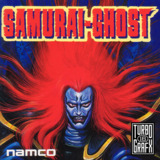