Acclaim took the wrap off its upcoming multisystem third-person platformer today at its studio in Austin, Texas. Shown briefly on video at last year's E3 under the name of Jinx, the game has really come together. Now called Vexx, it is shaping up to offer a very polished platforming experience. In his presentation, Lead Designer Thomas Coles cited the play mechanics of Banjo-Kazooie and Mario 64 as inspiration for the game. Judging from our time with a fairly unoptimized 50-percent-complete build of the game on the Xbox, the development team appears to be on its way toward creating an engaging platformer.

You'll take control of Vexx, a young man intent on ending the rule of Dark Yabu and his Shadowraiths. A resident of a village called Rockhaven on the shattered planet of Astara, Vexx has a bone to pick with Yabu. Yabu and his wraiths have enslaved Vexx's people and forced them to work in the caves near the village, and to top things off, Yabu has killed Vexx's grandfather. Not quite experienced at the whole "revenge" thing, young Vexx runs into trouble after sneaking aboard Yabu's airship and discovering two powerful artifacts. A pair of relics called the Astani Battle Gauntlets--artifacts from an ancient civilization that existed before the great cataclysm that shattered Astara--bond themselves to Vexx's hands. On the upside, the gauntlet gives Vexx special powers, and on the downside, he's discovered by Yabu and attacked before he knows how to use these powers. Left for dead, Vexx is rescued by a helpful blind hermit, Darby, who serves as his mentor when Vexx sets out to take on Yabu, who is ensconced in his fortress, the Landspire.

Vexx's quest for Yabu takes him through the six worlds of Astara. Because of the aforementioned cataclysm, the planet is now broken into three chunks. The largest chunk is home to three areas, while the other three areas are found on smaller chunks of the world that orbits the larger one. As you play through the game, you'll find a variety of environments, ranging from volcanic islands and desert temples to frozen citadels and a giant's castle. All told, the game features 18 levels, three per world. Along the way, you'll encounter three main traditional bosses and three midbosses, along with some other unpleasant surprises for Vexx.

Moving around in the various worlds feels comfortable because of the game's basic control scheme. You'll move Vexx with the left analog stick, crouch with the L trigger, attack with the A button, jump with the B button, swim with the X button, and manipulate the camera with the right analog stick in the free-look mode. In a nice touch, you'll have quite a bit of fine control over Vexx's swimming, thanks to analog support in the X button. Depending on the amount of pressure you exert on the button, Vexx will either swim slowly or race through the water at high speed. In addition, Vexx has an array of abilities open to him--by harnessing the power of the Astani Gauntlets, you'll be able to perform superjumps from a crouch and fire off blasts of energy. In addition, you'll have access to other abilities, thanks to elemental items you can equip to the gauntlets and power up in certain locations. For example, an earth power will turn Vexx into a rock form with unique abilities for a limited amount of time.

We were able to check out six work-in-progress levels that showcased a variety of promising graphical and gameplay elements. The first level is an outdoor area, similar in feel to some of the areas seen in Jak and Daxter. Featuring a good amount of detail, the area lets you see far off into the distance, and like in Jak and Daxter, you can run to most of the places. Although graphical elements like water weren't final yet, the level looks solid and runs well. The next level is set in the interior of a giant's castle, which allowed the team to go to town with scale. Dwarfed by his surroundings, Vexx must approach everyday items, such as tables and pianos, as if they were mountains. Certain objects, like pillows, function as trampolines, which send you high enough in the air to reach new areas. Little touches are everywhere to give the level a bit of personality--for example, when you're running along the table, silverware and saltshakers react when you bump into them. In addition, the piano's keys depress when you run across them. The castle interior also gave us a taste of the minigames, as well as the game's method of presenting players with goals. In our exploration of the coach, we discovered a gamepad resting on a cushion, directly across from a television and Xbox. A bit of looking around located the television's remote, which reacted to a stomp and turned it on. A quick trip over to the console and a well-timed attack to the Xbox power button rewarded us with a simple, breakout-style game onscreen. By returning to the controller on the couch, we were able to play the game by moving Vexx to manipulate the controller. You will eventually find a total of six minigames as you go through the various worlds--if you successfully complete them, you'll be able to access them outside of the game and play them with three other players for a nice extra.

The next area is a subarea that you can access from the castle interior--here, you'll be able to explore the inner workings of a grandfather clock. Offering traditional platform jumping and showcasing one of the types of teleporter-style pads in the game, the level is well laid out--for example, in the clock, jumping on a ringed pad with an image of the sun on it sends you high into the air, allowing you to reach a distant platform. Some eye candy is present in the reflection mapping found on the various moving gears, which serve as platforms. An underwater area, set inside a globe surrounded by water, showcases a quirky sense of design. Smooth animation on the silhouettes of fishes and an enormous leviathan swimming around outside the enclosed area we explored, as well as lighting and water effects, look slick. A trippy music level, which is set inside the piano seen in the giant's castle, is extremely impressive--it offers a healthy mix of wild visuals and music that wouldn't look too out of place in any number of games released in Japan. A colorful wash of green lighting blends with a mass of musical notes that drifts everywhere. In our quest to reach the top of the level, we found ourselves scaling and jumping on to a variety of musical instruments. The intention is for the music to reflect the onscreen action by incorporating the sound of the musical instruments into the piece of music playing during the level, allowing the piece to evolve as you make your way to the top. Finally, an interior area showcases another of Vexx's abilities--climbing--as well as another teleporter pad type. By using the gauntlets, Vexx is able to cling to and climb along walls in the area. Showcasing inverse kinematic animation for his movement as he makes his way along the wall and an impressive number of particle effects as he climbs and slides down the wall, kicking up rock fragments and sparks, the level looks quite good in spite of its early state.

Overall, the graphics in Vexx look quite good already, and while not fully optimized, it already has a high frame rate, staying very near to a constant 60 frames per second. As Vexx's development continues, the team intends to implement a host of eye candy, including real-time lighting, day-and-night cycles, and real-time environment mapping. In terms of gameplay, a feature designed to appeal to more seasoned gamers will be implemented to reward more thorough exploration. As they did with the Al Bhed dictionaries in FFX, players will come across hints that will help them decipher the ancient Astani language, which they will find in many places throughout the game. Once players figure out how to read the language, the various places they come across will provide extra information on the back story and clues to help them in the game. Another gameplay feature that will be included is alternate means of transportation for Vexx. In addition to hoofing it through the land, he'll have access to a land beast, a flying insect that serves as an organic Jet Ski of sorts, as well as a third type of vehicle we have yet to see.

So far, the game is showing a lot of promise and should offer a welcome dose of platforming to the Xbox when it's released in October. Acclaim is also developing the game for the PlayStation 2 and GameCube--these versions are expected to be released at around the same time as the Xbox version. Look for more on Vexx as we get it. 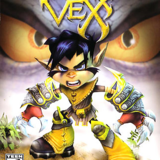