Raylight Studios is currently working on a GBA version of the 1997 PC space combat simulation game. First screens inside.

Wing Commander: Prophecy was first released for the PC in 1997, and Raylight Studios is currently working on an ambitious port of the game for the Game Boy Advance. The game will see players assuming the role of a rookie pilot named Lance Casey, who, along with the other members of his squadron, is charged with escorting and defending confederation ships as they encounter hordes of attacking aliens in their travels. The GBA version of the game will feature the same epic storyline as the PC original, complete with several completely different routes through the game and a cast of characters who often live or die as a result of the player's actions.

Raylight Studios is employing Blue Roses technology to power the game, which will feature real-time 3D graphics with plenty of detailed textures and special effects. The GBA version of Wing Commander: Prophecy will feature 48 missions in total, and players will get to pilot no less than nine unique ships as they progress through the single-player game.

In addition to the single-player campaign, Wing Commander: Prophecy will feature link-up support for up to four players in its dogfight mode. We'll bring you more information on the game as soon as it becomes available. 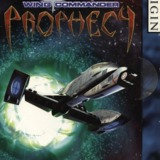