The popular console tennis game is coming to the PC. New screens inside.

Empire Interactive has announced that it will release a PC port of Virtua Tennis in Europe this week. The conversion is being done by development studio Strangelite, and the port will include all the features from the Dreamcast original, as well as some new elements. The gameplay remains unchanged, allowing you to choose one of seven male tennis stars including Yevgeny Kafelnikov, Jim Courier, Cedric Pioline, and Tim Henman and then take part in tournaments or start up a career. Players can also increase their character's skills and attributes by playing in minigames. New to the PC version is a multiplayer mode that supports up to four players via LAN or on a single PC. According to the publisher, the PC version also includes hidden game features and extras.

So far, no US release has been confirmed, but Europeans should find it in shops later this week. For more information, take a look at our full review of the Dreamcast version of the game. 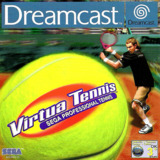