Eidos Interactive has today released new information on The Italian Job, which is currently in development at Climax. The game, which is based on the upcoming movie remake of the same name, will see players assuming the role of Charlie Croker and his gang members as they attempt to steal $28 million in gold bullion by creating the biggest traffic jam in LA history and then escaping from the scene of the crime in three supercharged Mini Coopers.

The single-player story mode will consist of some 15 different missions and will see players racing around a number of locales including Hollywood Hills, Downtown LA, and the city's metro and storm drain systems. Although the Mini Coopers are the vehicles that the movie is best known for, players will also get to take control of numerous others including a muscle car, an armored truck, and a cable van.

In addition to the single-player game, The Italian Job will feature split-screen support for two players, although this will only apply to the game's circuit racing mode in which players will be able to compete against each other on tracks inspired by locations in the movie. The game will also include a stunt driving mode with obstacle courses and such, although specific details on this option have not been revealed at this time.

All three versions of The Italian Job are scheduled for release alongside the movie this summer. We'll bring you more information on the game as soon as it becomes available, but in the meantime, be sure to check out the first-ever screenshots from the , , and versions, which were released today. 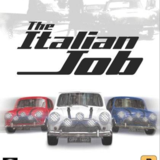