Another Rayman game is headed for the PlayStation, and this one will focus on multiplayer aspects, much like Rayman Arena.

Ubi Soft has released the first screenshots from its upcoming PlayStation game Rayman Rush. In this game, players need to run to the finish line as fast as possible, much in the style of Codemasters' classic Micro Maniacs. The game will feature 12 maps and five play modes. The modes of play are training, championship, time attack, lum, and target. The tracks in the game are split up into four different worlds, each one having its own visual look.

The game will feature seven playable characters, and they can all pick up a number of weapons to help them in the races. A variety of obstacles will block the player's path, including fire, electric barrels, and moving pillars. The game also offers a two-player mode for direct head-to-head play. A reward system will let players unlock hidden characters, exclusive skins, and bonus modes.

The game is currently scheduled for a March release in Europe. There has been no word on a North American release date at this time. 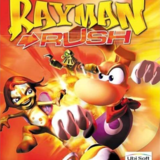