Prehistorik Man will find a home on a third platform, as it is being developed for the Game Boy Advance.

Titus Games has announced that it will release an updated version of Prehistorik Man for the Nintendo Game Boy Advance. This latest incarnation of the game will be closer in visual quality to the original SNES version on which it is based, as opposed to the more recent Game Boy Color release. In the game, players must travel through five levels in side-scrolling fashion in a quest to collect food for a fall feast. A variety of weapons will be available throughout the game, as players will have to face enemies ranging from simple spiders to various forms of dinosaurs.

Prehistorik Man will be released for the GBA this November. 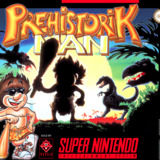