Take a look at the first screenshots from Pitfall: The Mayan Adventure for the Game Boy Advance. 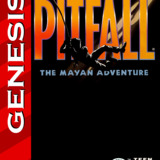