Montreal, Canada-based Strategy First recently visited the GameSpot offices to show off the latest build of its upcoming 3D real-time space-based strategy game, O.R.B. (Off-World Resource Base). And on first look, more-than-obvious comparisons to the other 3D real-time space-based strategy game and, coincidentally, Canadian-built title, Homeworld, come to mind. Yet, the development team has been working on the title for two and a half years

Gamers enter O.R.B. commanding the military forces of either the powerful, less accurate and slow Malus forces or the quick, accurate, and less powerful Alyssian forces as they seek to control the Aldus universe. Within the universe there are two asteroid belts (one about midway though the solar system and the other tightly knit around Aldus' sun). Your goal is to rule the universe by using both your technology and astral objects to gain strategic advantages. As in other RTS titles, you must mine for resources to advance your technology tree, destroy enemies with your war ships (commandos, fighters, destroyers, battle cruisers, and space stations), and build secretbases on resource-depleted asteroids.The asteroid bases serve as mobile refuelling and craft safehavens when you're not near your spaceport (the primary location where all craft are built). And with more advanced technologies, you' can use hyperspace portals and the like to leap into different areas in the universe without waiting for transports to wander through space. Aggressive players who don't focus readily on researching new technologies will have an advantage, as they can assimilate the other's technology by capturing their ships. Or as you wander from asteroid to asteroid, you may find alien technology that you can add to your own.

O.R.B. is based in only one universe with two societies (a third alien race does enter the system after either the Malus or Alyssian forces prevail ), and each side will have 12 missions. And as you amass more ships, they'll carry over to the next mission. Unlike it's competition, O.R.B.'s vehicles feature more detailed textures and little user interface improvements. Some of those improvements include a gauge that lets the user know how long it will take to get to a particular location, a color gradation bar that indicates the elevation of an object, and smart waypoints. The development team has also added visual cues like technology trees, so as ships are upgraded, improvements like mines spies and hangers will show up as they're added. The title will also come complete with multiplayer support for up to eight players in co-op or skirmish gameplay, and ships can display team logos to indicate their affiliation.

Currently, O.R.B. is scheduled for a late August/early September release, and more information about the game will be announced as its development ramps up for its E3 showing. 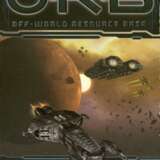