Take a look at the first screenshots from the Xbox version of EA's hoops game.

Comments
Electronic Arts has released the first screenshots from the Xbox version of NBA Live 2002. The game will essentially share its features set with the PS2 version, which means that it will include a new franchise mode, over 50 new dunks and post-dunk celebrations, and new cut-scenes with a pregame focus. According to EA, it is also taking advantage of the Xbox hardware to improve the game from a graphical standpoint. 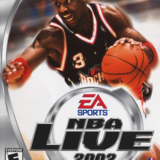