Atlus releases the first images from Maken Shao for the Sony PlayStation 2.

Comments
Atlus has released the first screenshots from Maken Shao for the Sony PlayStation 2. The company has opened a limited section on its Japanese Web site for the game, which will be played in the third-person perspective. The original Dreamcast game, Maken X, was played in the first-person perspective. Maken Shao will be released on the DVD format, and it currently has a tentative 2001 Japanese release date. A North American release date has not been announced at this time. 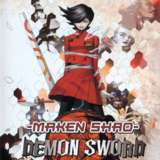