Capcom will release this spooky game in early 2004.

Capcom recently showed off a trailer for Gregory Horror Show, an upcoming action adventure game for the PlayStation 2. The title is based on a popular Japanese television show about a square-headed mouse who is the caretaker of a spooky hotel. The game will put you in the role of a human character created specifically for the game and follow your attempts to get out of the hotel before tragedy strikes.

The game has a very striking look thanks to blocky, simplistic graphics that are reminiscent of Animal Crossing on the GameCube--albeit with a horror-themed twist. As the young boy trapped in Gregory's hotel, you'll have to collect the souls of the unfortunate people who've been absorbed into the building after not being able to escape in order to get out before you become one of them. To do so, you'll have to roam the hotel and monitor the behavior of the permanent "guests" in order to determine when you can snatch their souls. Your investigation will have you snooping through rooms, looking through keyholes, and eavesdropping on the motley crew that inhabits the hotel. The catch to the twisted little affair is that most people, alive or otherwise, take issue to having their souls swiped and will not hesitate to snatch it back from you, given the opportunity. As a result, you'll have to be on your toes as you navigate the house, which is a bizarre maze.

Gregory Horror Show is slated to ship early next year for the PlayStation 2. We'll bring you more information as it becomes available. 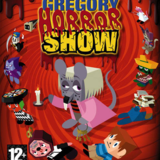