Capcom releases the first screenshots from Final Fight for the Game Boy Advance.

Capcom has released the first screenshots from Final Fight for the Nintendo Game Boy Advance. The game is essentially a direct conversion of the arcade version. It features the three main characters--Guy, Cody, and Haggar--as they fight through Metro City to save the town and rescue Jessica. In the game, two players can play cooperatively using the GBA link cable.

Final Fight for the GBA will be released in Japan on May 25. A North American release date has not been confirmed at this time. 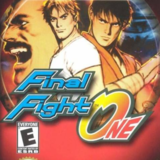