Acclaim announces the sequel to the high speed racing series, which originally appeared on the N64.

Acclaim has announced that it will bring the Extreme-G series to the PlayStation 2. The latest installment in the series is titled Extreme-G 3, and it's currently being developed at Acclaim Studios Cheltenham, which was formed last summer by former members of Psygnosis' South West Studio.

The game will sport a racing field of up to 12 bikes and detailed, twisting tracks. Futuristic weapons will make a return as well, and players will have a turbo boost at their disposal to overtake opponents. One cool feature is that when players break through the sound barrier, the game's audio will emit a realistic-sounding sonic boom. The game will also feature a detailed bike animation system, providing complete animation sequences that are shown in relation to the bike's handling and air brake and weapons usage. Additionally, according to the developers, the so-called landscape animation system will bring the worlds to life. Currently, there are three gameplay modes that have been confirmed. They are team grand prix, head-to-head, and a two-player cooperative mode in which players can compete in a split-screen format.

"Extreme-G 3 represents a huge leap for Acclaim in terms of next generation products," commented Nick Harper, lead designer at Acclaim's Cheltenham Studios. "Not only do we believe this game to be one of the best looking PS2 titles in development--utilizing the raw power of the Emotion Engine and Vector Unit graphics chipsets--but we are also developing a highly sophisticated bike physics system to cater to the convoluted twists of the Extreme-G 3 racing circuits."

The game is currently scheduled for release in August in Europe. A North American release date has not been confirmed at this time. 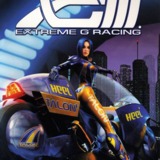