Infogrames, having acquired the popular Dragon Ball Z license, has announced the development of a Game Boy Advance version of Score Entertainment's Dragon Ball Z Collectible Card Game. The game allows players to control their favorite hero or villain from the Japanese anime series and fight battles of epic proportions. Among the characters who can be used are heroes such as Goku, Gohan, and Krillin and villains such as Garlic Jr. and Frieza. Players will be challenged to fight through a ladder of matches in order to reach the final opponent, Cell.

One-on-one confrontations are handled in turn-based fashion, with each fighter accumulating anger and strength in an effort to achieve greater power levels. Decks can be tailored to a particular character's strengths, allowing for a wide selection of energy or physical attacks, defensive techniques, and noncombat cards. Players are encouraged to utilize multiple Tokui-Waza combat styles, which represent specialized martial arts. Cards can be traded between players, and several will be exclusive to the Game Boy Advance game. The handheld version of the game will feature more than 300 cards from the Frieza, Saiyan, Trunks, and Android saga expansion sets. As a special bonus to players of the collectible card game, a special promotional card will be included with the game.

The Game Boy Advance version of the Dragon Ball Z Collectible Card Game is currently scheduled for release in June. 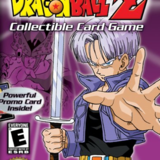