Electronic Arts releases the first information on this collection of around 30 Disney-inspired minigames. First screens inside.

Electronic Arts has today released the first information on Disney's Party for the GameCube, which is currently in development at Hudson. A collection of around 30 minigames, Disney's Party will allow up to four players to visit and race around Uncle Scrooge's new Party Park in an attempt to win special items such as stars, lollipops, and teacups. The primary mode of play will essentially be an interactive board game in which players will explore eight different Party Park environments and will be required to compete in minigames as they progress. Playable characters in the game will include Mickey, Minnie, Donald, Daisy, Goofy, and a ghost named Billy.

Examples of minigames that will be featured in Disney's Party include racing pirates to a pot of gold, outrunning an avalanche on a snowboard, navigating a waterfall in a kayak, saving cows from alien abduction, collecting crystals while bungee jumping, and performing moves in a dancing competition. In addition to the 30 different collectible items that determine which player wins the game, players will be able to collect a total of 234 different Disney character cards, although it's not yet clear if these will grant access to any kind of bonus content.

Disney's Party is currently scheduled for release this fall. We'll bring you more information on the game as soon as it becomes available. 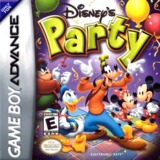