Microsoft releases the first information on its upcoming prehistoric hunting game for the Xbox. First screens inside.

Microsoft has recently updated the Japanese section of its official Xbox Web site with the first information on an action game named Dinosaur Hunting. The game, which is currently in development at Japan-based Scarab, is set in the year 1910 and will see players assuming the role of one of a number of characters sponsored by the Arc Foundation to hunt and capture dinosaurs that have somehow escaped extinction in the Amazon.

Although the game is said to be inspired by Arthur Conan Doyle's novel The Lost World, the game will feature a number of technologies and weapons that wouldn't have existed in 1910, including modern sniper rifles, communicator headsets, and a tranquilizer gun. When tracking dinosaurs, players will need to look out for footprints, animal carcasses, droppings, and the like, and as they progress through the game they'll discover that different drug compounds are more effective for knocking out certain species.

Further information on Dinosaur Hunting is scarce at present, but we'll bring you more information on the game, which is currently scheduled for release in Japan on September 18, as soon as it becomes available. 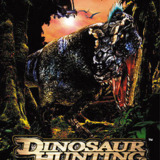