Acclaim Entertainment has today released gameplay information on the GBA version of Dave Mirra Freestyle BMX 3. The game allows players to perform more than 1,000 different BMX tricks either as their own custom rider or as one of the pros featured in the game, which include Ryan Nyquist, Colin Mackay, Mike Laird, "Luc-E" Englebert, and, of course, Dave Mirra.

There'll be 11 different levels in the game, taking place in such varied locations as airports and oil tankers, all requiring players to master vert, street, dirt, and flatland skills. Players will also be able to pit their skills against their friends' in the game's multiplayer link-up mode. 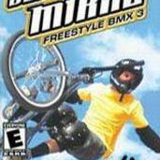