Namco takes the wraps off the next installment in its PS2 fighter-sim series, due in 2006; first trailer inside.

Lost among the flurry of PlayStation 3, Xbox 360, and Nintendo Revolution news at this week's Tokyo Game Show was the announcement of a sure-to-be-popular game for current-generation consoles. Without a lot of fanfare, Namco launched the Web site for an upcoming entry in its popular air-combat-sim series, Ace Combat Zero: The Belkan War. Japanese retail sources indicate the game will be for the PlayStation 2, and according to the brand-new trailer for the game (viewable below), it will be released in 2006.

The trailer for Ace Combat Zero: The Belkan War gives some key details on both the game's storyline and its gameplay. Its narration explains that the game will be a prequel to Ace Combat 5: The Unsung War, the latest installment in the franchise (released last October). It explains the origins of the Great War of 1995, which led to the defeat of the fictional country of Belka, which was responsible for the war in Ace Combat 5. It also shows some of the planes that will be featured in the game--all 1990s-era fighters--including the FA-18 Hornet and F-15 Eagle (made by the US in the real world).

GameSpot will have more details on Ace Combat Zero: The Belkan War as they emerge. For more on Ace Combat 5: The Unsung War, read our full review. 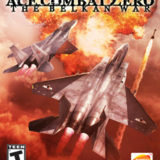