The Test Drive Off-Road series comes to the Xbox. Here are the first details.

Infogrames is bringing its wildly successful Test Drive Off Road series to the Xbox platform with Test Drive Off-Road Wide Open. The game will feature 13 killer trucks, including the Dodge Ram 2500, Ford's Bronco, the Dodge Durango, and GMC's Hummer. The Xbox version will also include an exclusive vehicle not found in the PS2 version of the game, the Chevy Avalanche.

Following the traditions of the Test Drive Off-Road series, gameplay will once again be bouncy and rough. This time around though, each vehicle will be fully customizable and will come with its own handling characteristics. The environments in Wide Open focus on four diverse locales, including Moab, Utah; Yosemite, California; and the Big Island of Hawaii. An as-yet-unannounced location specific to the Xbox release will also be featured.

Each environment will offer between eight to 10 different tracks with novice and expert variations. Some races will require you to race through checkpoints in a certain order, while others will focus on fastest lap or course times.

All tracks will be styled in a go-anywhere environment where you have the freedom to choose any path you wish, while attempting to complete the course in the fastest time possible. Each location will also contain a range of specific environmental effects, such as active volcanoes, flowing waterfalls, and toppling palm trees. What this boils down to is shortcuts, hazards, and water traps aplenty.

Similar to the PS2 version, the Xbox release will feature a licensed soundtrack laid down by groups such as Metallica, Digital Assassins, Fear Factory, 303 Infinity, and Unloco. Unique to the Xbox version, however, will be an on-the-fly radio that will contain a variety of techno and softer music stations, which you can listen to as if you were in your own car.

We'll have more on Off-Road Wide Open as it becomes available. 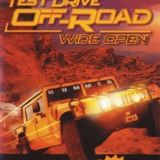