The popular cartoon and its giant robots will be coming to the Game Boy Advance.

During a visit from publisher TDK Mediactive, we had a chance to check out the latest build of its upcoming handheld action game Robotech: The Macross Saga, which is in development at Lucky Chicken. The game makes use of the popular Robotech cartoon license, which in turn is the US translation of the Japanese Macross series that helped popularized mecha.

Robotech: The Macross Saga will initially allow players to choose from a number of popular characters from the series, including Rick Hunter, Roy Fokker, Maximillian Sterling, and Miryia, and more can be unlocked as they progress through the game. All these characters and their Veritechs will have different abilities and attributes. The Veritechs themselves seem to be well represented in the handheld game so far, having the ability to transform from a jet, into a battloid (humanoid), into a guardian (the transitional form between battloid and jet). Each of the forms will have its own uses. For example, the battloid form can avoid many of the missiles and enemy shots by sticking to the ground, while the jet form is more maneuverable. Players earn experience for their characters by destroying enemies, and they can then purchase upgrades for their leveled Veritechs.

The parts of the game we were able to check out played like a standard side-scrolling shooter, with dozens of projectiles onscreen at once that needed to be dodged, as well as swarms of enemies that attacked in patterns. According to TDK, some of the game's other levels will play out in an isometric perspective, with different gameplay mechanics for players to learn. The environments we observed included ruined cities populated by enemy machinery and outer space.

Robotech: The Macross Saga is currently scheduled to ship to stores on September 9. Stay tuned for the latest as the game approaches release. 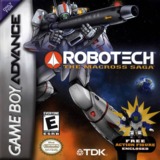