The beloved Puyo Puyo takes on a new type of game play - dance. And the Milkman finds that it may be a little offbeat.

While we were blessed enough to have received the highly anticipated Space Channel 5 for the Dreamcast today, we were also cursed enough to have received the highly unanticipated Puyo Puyo Da! as well. Featuring many of Compile's best-known Puyo Puyo puzzle-game characters, Puyo Puyo Da! is a "dancing" game in the same vein as Parappa the Rapper. With J-pop chirping along in the background, you're required to match beats with buttons. Sounds pretty basic, right? Well, the problem with the game is that it may be the dancing-game equivalent of Virtua Striker 2. You never really feel like you're controlling your character. The tempo-bar at the bottom of the screen almost feels completely independent of the music. The character seems to sway and bob independently of the tempo bar, and the commands you have to enter to outscore your opponent seem to be related to absolutely nothing. Unlike Bust-A-Groove, you don't seem to have any special attacks to disrupt your opponent with. You basically just start the game, try to keep up more than your opponent, and hope your score is higher at the end. The only other thing to connect the game to its past puzzle legacy is a slew of puzzle drops that dump on the loser's head at the end of a match.

While the graphics move at a nice high-resolution 60 frames per second, the characters aimlessly smile at the screen like a bunch of drugged ballerinas. We also finished the first game we played after a scant five rounds. If you're a really big Puyo Puyo fan, you might want to pick this up. To anyone else, this isn't even worth playing. Look for the painful full review coming soon. 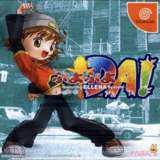