We go hands-on with Enix's next Pokémon clone.

Enix is following the addictive Dragon Warrior Monsters with two sequels featuring brother and sister Cobi and Tara. Similar to Nintendo's Pokémon games, each title follows the same basic storyline but features monsters specific to each. Monsters found in Cobi's game are less likely to be found in Tara's game and vice versa. The story this time finds the two leads moving to the island of Great Log with their monster ranching family. Unfortunately the island's prince, Kameha, and his sidekick, Warubou, a familiar face from the original DWM, don't appreciate the new arrivals. As a result of Kameha and Warubou's antisocial behavior, Great Log begins to sink, sending Cobi and Tara off in search of magic keys that have the ability to save the island.

Featuring a slightly different gameplay structure than its predecessor, DWM 2 does not require players to explore randomly generated dungeons. Instead the game offers scenarios for players to complete, with static dungeons to explore. Fans of the random dungeons shouldn't despair, as those types of dungeons can still be found in the game. But while the challenge of saving the island is certainly pressing, those interested in monster raising will be pleased to find a robust selection of options. This time out, players will be able to raise, breed, and tame more than 300 different types of monsters from 11 different families--including the first appearances of monsters found in Dragon Warrior VII. Monster interaction has been tweaked to let players talk to their monsters and get a feel for their individual personalities. The game also features a number of monster-related link cable options. Players will have the ability to exchange monsters, battle against a friend's monster in monster matches, team up with a friend to duke it out against AI controlled monsters, and exchange keys to unlock previously inaccessible worlds. In addition, special items in the game will only be able to be accessed if they are exchanged with friends.

Graphics in both games are comparable to the original Dragon Warrior Monsters, although the new island setting does offer more visual variety and color than the interior of a large tree found in the original. The game's interface and gameplay system were faithful to the effective layout of the first and seemed to have the same addictive quality. The tweaks to the information system, which let players track a monster's lineage, are a nice touch. Gamers eager to breed monsters and save an island can look for both Dragon Warrior Monster titles when they ship simultaneously this fall. 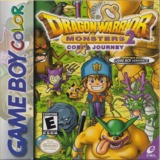