Russian game publisher Russobit-M and developer GSC Game World have announced FireStarter, their upcoming sci-fi first-person shooter. The game is set in a virtual-reality machine in the year 2010. Players assume the role of a character whose mind is trapped in the machine due to a virus, and in order to escape, they must complete a difficult mission within 48 hours.

In the game, players will have five characters to choose from--including a soldier, an agent, and a gangster--each of which has a unique set of skills and characteristics. As players advance through the game, they will gain points that can be used to increase their character's attributes and abilities. Players will encounter 20 types of enemies from three main categories--technical, demonic, and symbiotic--and each monster will have different types of attacks and behaviors. To defend against these enemies, players will have access to more than 20 different kinds of weapons and other items.

FireStarter will feature 16 single-player levels and a multiplayer mode that will support up to eight players over LAN or Internet connections. The multiplayer mode will include deathmatch, cooperative, and team-play options.

FireStarter is scheduled for release in late 2002 or early 2003. No North American publisher has been announced. For more information, visit the official FireStarter Web site. 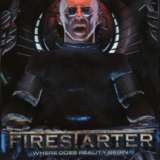