In addition to dungeons and a world map, the traditional weapon wheel is gone, mages expend health to deal damage, and more.

At PAX East, Nintendo showed off the game ahead of its (surprisingly soon) May release. This provided us with a look at two of Echoes' major new features, both of which were teased in the announcement trailer back in January. Rather than moving directly from mission to mission, a world map allows you to have some freedom in choosing what you do next.

Among the things you'll find on the map are dungeons. These abandon the standard top-down camera view and allow you to explore them in 3D with a third-person camera. Destroyable objects and treasure chests hide items and money to find, and you'll also encounter enemies. Engaging one takes you into a standard Fire Emblem battle. It's almost like a mini mission, as you still have access to your squad and face multiple enemies, rather than simply taking part in a one-on-one fight. You can gain an edge by attacking the foe in the dungeon before combat begins, reducing their health to start the battle, but they can also do the same to you.

Rather than playing as a single character of your creation, Echoes follows a pair of "dueling" protagonists that you'll swap between. Celica and Alm each set out to defend their country, but they take different approaches to doing so. You'll be able to swap back and forth between the two routinely, or you can spend longer stretches of time playing as one before jumping into the other's story. We didn't see much of the story, but Echoes is notable for being the first Fire Emblem game to feature full voice acting (some very minor characters aside).

Two other changes will either be greeted warmly or harshly depending upon the types of units you favor. Archers can now counter-attack from a single tile away, potentially allowing you to be more aggressive with them. On the other hand, mages now expend a portion of their health in order to cast spells, forcing you to much more careful about how they are deployed and utilized.

A Nintendo rep wasn't able to confirm as much, but what we saw suggested that weapon durability won't be making a comeback after it was excised from Fates. And, true to its roots as 1992's Fire Emblem Gaiden, it also doesn't feature a support system during battles; that wasn't introduced until later in the series. Also absent was the traditional weapon triangle, although the rep did say there are ways to gain an advantage in battles without offering any specifics.

Fire Emblem Echoes launches for 3DS on May 19. 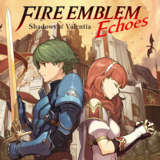