Turn-based strategy game launching this year for PC, Mac, and iPad; watch a trailer and see some screenshots now.

The next game from the mind of veteran Civilization designer Sid Meier has been revealed. 2K and Firaxis Games have announced Sid Meier's Starships, an interstellar strategy game.

Scheduled to arrive in early 2015, the turn-based game is coming to PC, Mac, and iPad. Pricing was not announced, nor were any details about a possible Android version.

In the game, you'll control a fleet of starships as you journey through the galaxy to complete missions, protect planets and their inhabitants, and build a planetary federation.

As you trek through the stars, you'll be challenged to expand your federation's influence and reach. You'll also amass futuristic technology and take part in turn-based combat using a deep roster of customizable ships, some of which you can see in the image gallery above.

2K adds that the missions you'll take on have their own unique maps, featuring "dynamically generated tactical combat" that should boost the game's replayability.

"When designing Starships, I was intrigued by the idea of exploring the next chapter in the story of Civilization: Beyond Earth," Meier said. "What happens after we colonize our new home and eventually build starships to take to the stars? What has become of our long-lost brothers and sisters from the planet Earth?"

"My goal was to create an experience that focuses on starship design and combat within a universe filled with interstellar adventure, diplomacy, and exploration."

2K also teases that Beyond Earth and Starships will feature cross-connectivity for people who own both games. The developer isn't talking specifics, but says that this integration will "enhance and expand upon both game experiences."

Starships was developed by Meier and a small team at Firaxis. Check back later this week for an in-depth interview with Meier about his new development team, and lots more. 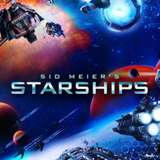