Finally, A Goonies TV Series Is Coming--Sort Of

Like many other beacons of '80s nostalgia, such as Ghostbusters, fans have clamored for a reboot or sequel to the 1985 adventure film The Goonies for decades now. While Fox has finally ordered a pilot for a Goonies-related TV series, according to Variety, it's probably not exactly what fans had in mind. The untitled project will follow a substitute teacher named Stella Cooper who helps three students make a shot-for-shot remake of their favorite movie, The Goonies.

Writer Sarah Watson--best-known as the creator of the acclaimed feminist TV drama The Bold Type--will helm the production. Goonies director Richard Donner will serve as executive producer. The plot of this new effort shares certain similarities with that of ambitious real-life fan-films, such as a shot-for-shot remake of Raiders of the Lost Ark created by three Mississippi teenagers in 1989.

Over the decades, there have been many, many rumors about a potential Goonies 2, including a shelved animated series for Cartoon Network, and several scripts in varying levels of completion. Several cast members have previously indicated their lack of interest in reprising their roles, but it's unclear if any of them will appear in this new TV series. Regardless of how that shakes out, as far as we're concerned, there's only one true Goonies 2: the 1987 NES game from Konami. 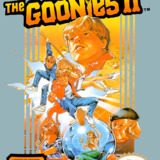