Capcom announces the newest game in its beloved beat-'em-up franchise.

Capcom announced Final Fight: Streetwise for PlayStation 2 and Xbox at its E3 press conference today. As the newest game in the venerable arcade beat-'em-up series, Streetwise will feature a fully 3D and explorable Metro City, which is a departure in style from the 2D side-scrolling style of the first iterations in the franchise. The gameplay will still offer a lot of hand-to-hand fighting, complete with combos that finish off with gritty street-fighting moves like haymakers to the nose, and knees to the groin. The fighting and overall gameplay will be deeper this time around, as you'll need to complete storyline missions and side missions, be able to interact with non-player characters, as well as gain new fighting skills and weapons as you earn respect throughout the course of the game.

You'll take the role of Kyle Travers, renowned pit fighter and the brother of Cody Travers, who was one of the original Final Fight characters. Cody gets kidnapped by an underground gang, while the whole of Metro City is in upheaval thanks to the rapid spread of a new designer drug. Kyle must deal not only with the forces who've kidnapped Cody, but also with the random violence that's erupted throughout the city. As you make your way through the campaign, expect to run into some familiar faces from previous Final Fight games, including original Final Fighter, Mike Haggar.

The overall style of Streetwise is gritty, with the city plunged in a perpetually grimy darkness. This Final Fight game has a very dirty mouth. The character designs seem more conservative than in the original Final Fight, which offered '80s-style punks with colored mohawks, biker chicks in dominatrix-style clothes, and burly wrestlers who bore a suspicious resemblance to Andre the Giant. By contrast, the characters in the first screenshots of Streetwise are clad in typical urban gear, like gold chains, baggy cargo pants, and bucket hats. Parts of Metro City look much like a war zone, with collapsed buildings, fires, and debris to move in and around. Since the game is now fully 3D, you'll be able to explore the city in a somewhat open-ended nature, finding NPCs to interact with who'll give you missions to complete as you inch closer to rescuing Cody.

The new respect system is a method of scoring that dynamically updates based on your actions during the game. Respect is important because it affects the way that you interact with both neutral NPCs and enemies, and it also unlocks new moves and weapons. Beating down bad guys, winning pit fights, finishing side missions, and playing minigames are different ways you can earn respect and improve your character's fighting ability. Respect is split into two components: tension and money. You build tension based on the way you fight. Doing stylish combos in quick succession builds more tension than using weapons or defeating enemies with simpler attacks. The money you earn throughout the game can be used to buy weapons, information, and hire sidekicks to help you.

As mentioned, the fighting system in the game offers combos and supercombo moves when in hand-to-hand mode, but as in the original Final Fight games, Streetwise will also include limited use of weapons. These range from pool cues, lead pipes, and knives, to guns like shotguns and automatic weapons. You'll also be able to activate special modes while fighting, including an "instinct mode" that increases your attack speed and accuracy, and allows you to combine fighting moves with weapon use. The "countertime" mode is a system for defense that lets you slow down time by parrying and countering the attacks enemies use on you.

Final Fight: Streetwise is currently slated for release on the PS2 and Xbox this winter. Stay tuned to GameSpot for more details on the game as we get them. 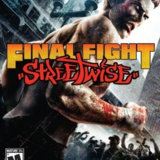