When Final Fantasy XIII came out, Square Enix launched the game in Japan alongside a limited-edition version of the PlayStation 3 Slim featuring a pink image of protagonist Lightning on a white version of the hardware. It turns out Lightning will strike twice with Final Fantasy XIII-2, as the publisher today announced another specialty hardware bundle sporting the star of the game.

The Final Fantasy XIII-2 Lightning Edition ver. 2 PS3 will launch December 15 in Japan alongside the standard Xbox 360 and PS3 versions of the game. The console features a different pink image of Lightning, this time emblazoned on a black 320GB version of the hardware with the game's logo. It will be available in limited quantities at launch and will sell for ¥37,960 (about $500).

That wasn't the only Final Fantasy XIII-2 news from the publisher. Square Enix also confirmed that it is working on downloadable content for release after the game's launch. However, it did not offer details as to what form that content would take.

Final Fantasy XIII-2 is set for release on the Xbox 360 and PlayStation 3 in North America by the end of January, with a European launch early in 2012. 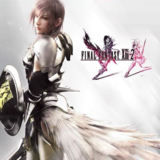